Recently, I have been worrying some and perhaps the universe answered me in the gifting of a worry stone. As a friend mentioned: ‘The Universe is letting you know it loves you and not to worry!’
That is so not ME! I even began to research how to make them out of my own rocks as every one has their own metaphysical angle. I tend to like agates and jasper’s so I will throw in this example.
One of my own favorite stones are ‘Snake skin Agates’ and they are also respected for being a “searching stone.” The suggestion being that before hunting for beach rocks I should have drilled one into a bracelet or necklace. 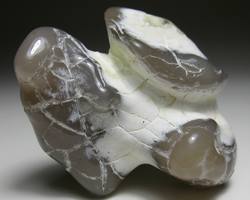 It helps you to find things! Sadly my friend Al suggested that rather than finding a gold coin on the sidewalk you might more readily find or step onto a dog turd.
That brings me to my rocky off-topic commentary regarding present day politics.
Harry Reid, Boner and the administration have much to pay for. In the meantime fearing the onslaught of the wheel chaired and disabled the government has begun building a custom made new building for POTUS to live in. There will be no further evacuation for the first family. The former “first black president” Bill Clinton was involved in the design. Our president “Renegade.” will simply have to tough it out. 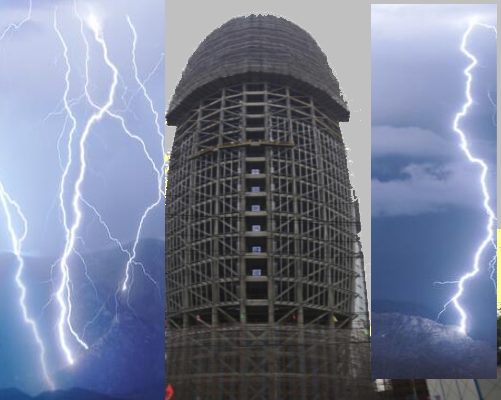 Sad but not true – In cost saving measures Administration officials ordered Park personnel to turn off Yosemite Falls in California. When asked about the rationale of this decision, the Dept. of the Interior responded by saying it was necessary so as to redistribute its natural wonders to the other fifty-five States. And despite Canada’s protest America also turned off its half of Niagara Falls. Old Faithful was also plugged with a red white and blue suppository. Damn, that’s one hard pill to swallow.

A worse yet shutdown! Not only was NASA’s astronomy picture of the day not available, but stargazing has been banned as unlawful and all internet references to astrology have been expunged by NSA.
Until the budget is resolved we have all been advised to stay indoors and stop praying to the stars.
The U.S. postal service has been given the job of delivering those celestial replies to your door. Fed Ex if needed sooner.
I wrote my friend in P.A. that before Oct. 17th. I have been stocking up on lead, light bulbs and toilet paper. I encourage you do the same. I even got a special on “Fukushima” bulbs and the clerk was kind enough to sell me some iodine. Despite needing an extra eye in this time of turmoil, wise positioning would have it in the back of the head, not mounted like an extra headlight between the other two.

At least the squirrel found his way to Texazistan. I still continue to hope that we sell Florida and Texas off! So far Spain and Mexico have not agreed to the sale price. Canada did express an interest in Alaska but only if we ratify the Keystone pipeline from Alberta.

BTW Putin has been put forward for the Nobel Peace Prize. Thank you Syria!
Oh, and did I forget to mention that Waste Management has put in a bid for the Grand Canyon!

Now I return to my abode.

Disclaimer: 10/13 In no way do I wish to disparage the esteemed members (think anatomy) of our elected officials. I am sure that most of them are gigantic. Nor would I ever suggest that http://www.naturalnews.com/Fukushima.html ” is incompetent. I also think I restrained myself in doctoring/or faking photos of Waste Management filling up the Grand Canyon. My quaint rock home, may soon be replaced by the local overpass … as is the case for many Americans. God Bless all those who so nobly serve us!

EDIT! It ain’t the Park Rangers!
“One angry Park Service ranger in Washington told the Washington Times, “We’ve been told to make life as difficult for people as we can. It’s disgusting.”

LAST PICTURE SAYS IT ALL!

A French cemetery closed to loved ones wanting to visit their fallen warriors. 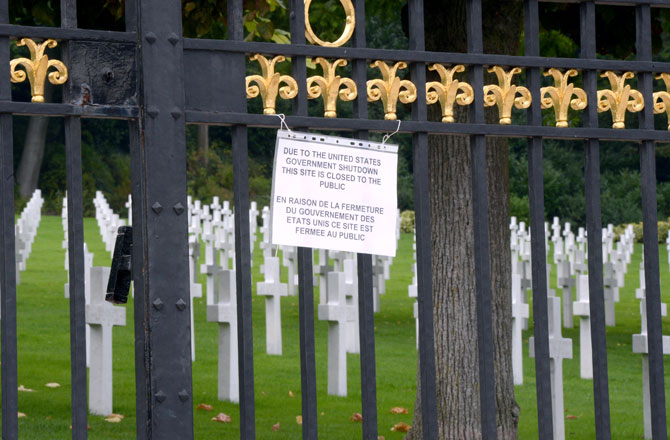