As a former member of the Dungeness Bonsai Society I would like to provide a site for Bonsai articles.

The first article will be on SUISEKI and was written by my best friend, Jim Scharschmidt. Jim passed away this year but we will be celebrating his 80th birthday this Sept. 6th. I have asked club members to bring a rock to place on his Riverine shrine at home or to visit some of beloved alpines and Hurricane Ridge experiences. Only one person did.
The following picture was on the web and is of the National Arboretum in 2008. 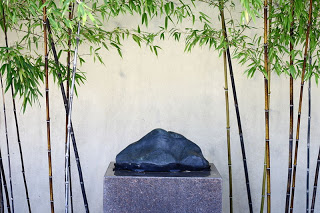 A Suiseki at the National Arboretum

Suiseki is the appreciation of nature, its wonder and beauty in miniature in stone. It is an art form created by nature over millions of years; born of fire and carved by the erosion of wind and sand, or water and sand, or by glaciers in the ice age. The word “Suiseki” means Water Stone. The awareness of it originated in China and spread to Japan, as did Bonsai. Looking for and collecting stones goes hand in hand with collecting natural Bonsai as they frequently can be found in the same place.

Suiseki stones are natural shaped, and may resemble mountains, glaciers, waterfalls, plains, plateaus, lakes, and islands. When displayed they should give the viewer the feeling of looking at a natural panorama. A good Suiseki should have a back, depth, and natural slope. They can transport one into a world of beautiful scenes. To the Japanese the art form is not one of gaiety and brightness, but one of simplicity, which gives the viewer peaceful Solitude and calm composure.

A good Suiseki is more suggestive than realistic — thereby leaving the viewer to use imagination for full enjoyment and oneness with stone. In Korea they are called: ‘useok’ (eternal stone).

I recommend Suiseki.com site for more information as well as a source for purchasing these stones. Suiseki by Felix G. Rivera is a book worth purchasing. 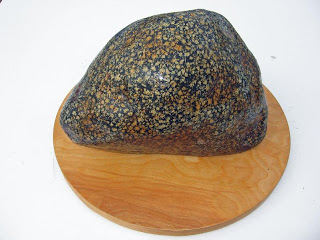 A sample of Chrysanthemum Stone. Porphory

This super sized chrysanthemum stone was found on his daughters beach west of Port Angeles. I still have not decided what to do with it. It is sitting on a 16 inch platform (stand) to give you some indication of size. Before enlightenment I was considering slabbing it, to make half of my rock chessboard. To cut or not to cut?

I believe it still remembers those pathological measurements, and despite its sullen temperament I gave it a warm bath and took it out to see the sun again. You see I had forgotten it; having taken it in during last years very cold weather. If I ever really decide to fix it up, I will have to start oiling it every quarter. Sigh, another chore I really do not need! The rock just thinks I’m just a cheap rockaholic and don’t want the expense the masseuse would charge. It figures I had already saved big bucks by splitting off a bottom piece with a chisel rather than taking to the rock doctor with all his expensive saws.

Now it expects to be oiled and have a cushy “Daiza” made. That would be a carved wood base conforming to the shape of the stone and they are VERY expensive. I have the yew, redwood, and curly maple, so I will just have to ask a fellow member how to use the router without too much finger loss. Not only does he have a black belt in Bonsai, he is also a master wood worker who despite his years has retained all his digits.

It is no small matter that Daiza (is pronounced die’- za) I will end with two nice pictures and my Rock site for them. 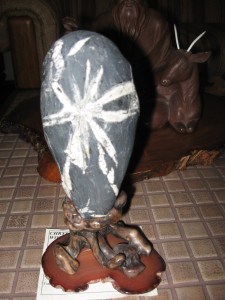 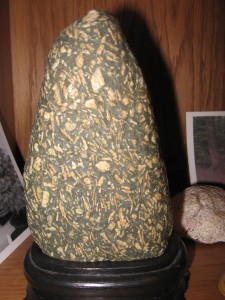